Skip to content
There have been positron beams in use at UCL since the early 1970’s since the first efficient positron moderator was discovered there by Paul Coleman, Karl Canter and co-workers [http://iopscience.iop.org/0022-3700/5/8/007]. The photograph below was taken in 1996, and shows a positron beam used in Dr David Cassidy’s PhD thesis (Positronium formation at surfaces and studies towards the production of cold antihydrogen, supervisor Mike Charlton, 1999). This beam, which is no longer operational, used a tungsten mesh grid as a moderator and produced around 1000 positrons/second. One can see a large diffusion pump at the lower end, and the black magnet coils used to guide the beam.

Things have changed quite a lot since those days. The current setup in our lab (shown below) at the moment uses a rare gas solid moderator (neon) and produces more than 5 million positrons/second. There are four main sections to this beamline, (1) the shielded Na source and moderator that produces positrons, (2) the positron buffer gas trap that provides the pulsed beam (5 ns wide pulses with 500,000 positrons each), (3) the Ps spectroscopy chamber where our Ps producing silica target is placed and (4) the laser table, where our Nd:YAG pumps our Sirah pulsed dye laser and our Radiant pulsed dye laser. Together all these components are used to produce Rydberg positronium in a two step photon process. There are no more diffusion pumps to be found! 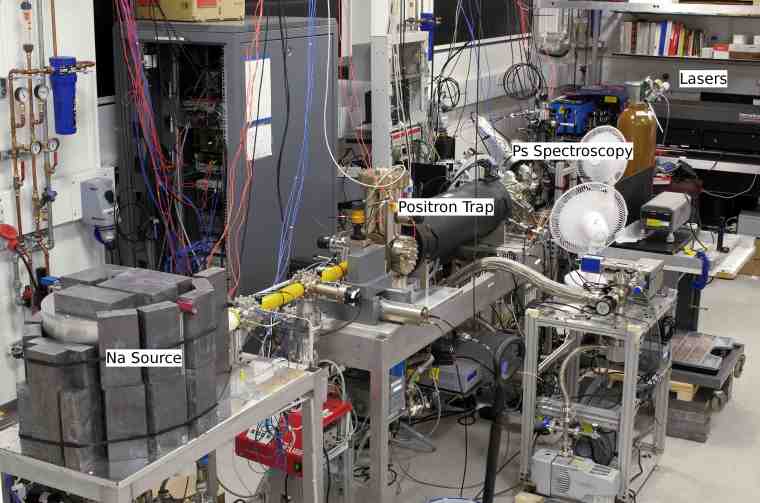